A cat with pure white fur is standing in a room where the light shines. The cat's name is Jun. It was 6 years ago that I kept it as a protective cat. I was consulted by someone who lived in the same apartment as I wanted to keep it until the owner was found.

"Once you hold it, it's useless. I've been with you ever since." Chiyoko Hasegawa told me so. "They don't get in the way of knitting, but if there's a spot where the wool sticks out, they'll jump at you." 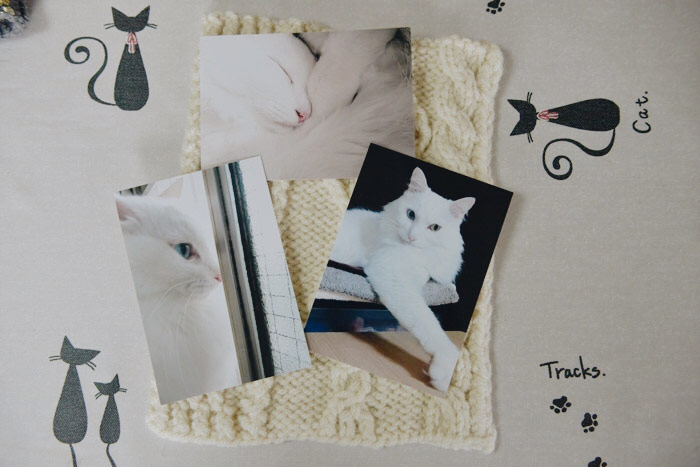 YUKI FUJISAWA's new works released this year include Aran-patterned mittens and mufflers. Chiyoko is one of the knitters who knitted these mittens and scarves. Yuki Fujisawa, a designer, came across a knitted item in the Aran Islands, and when he proposed a design that he would like to create a work with a pattern like this, he verified the knitting method. It was Chiyoko who gave it to me. 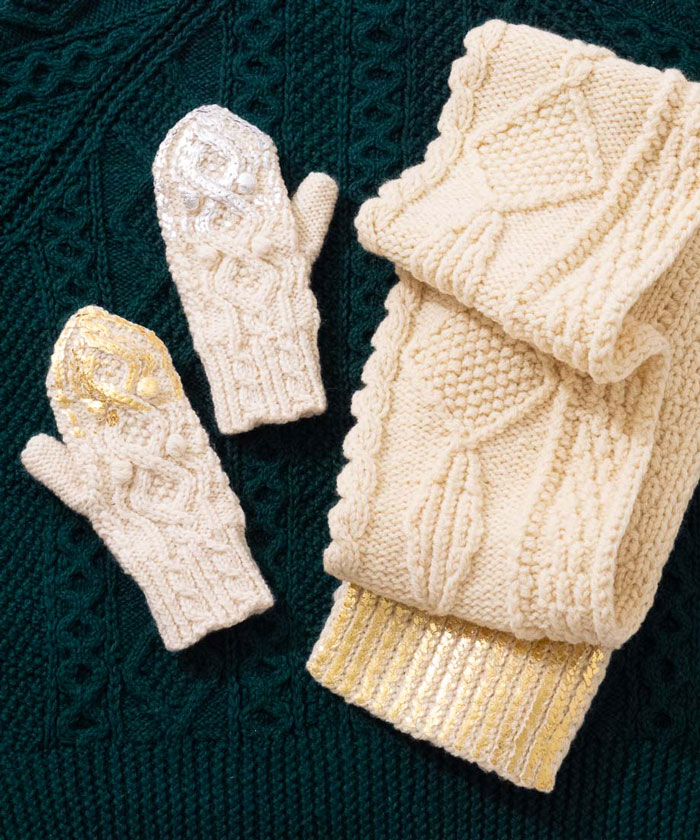 “This method of weaving is very special and I have never seen it before.” Chiyoko-san told me that while pointing to the pinecone-like pattern. “The weaving itself is not difficult, but I don’t really understand the structure. right" 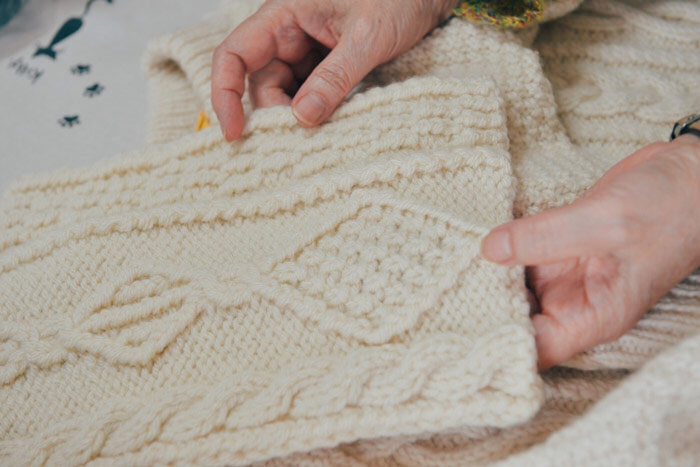 Knit works are knitted with yarn, so if you untie the yarn, you can elucidate the structure. However, he couldn't untie the vintage knit and continued to worry.

“Knitting is basically a single thread. The movement of the thread is from right to left on the front side, and from left to right on the back side. No. I didn't know what to do here, so I kept thinking about it in my head.I can't come up with something completely new, but I definitely want something that someone has knitted before. I was convinced that I should be able to do it, and I managed to figure it out this time as well. 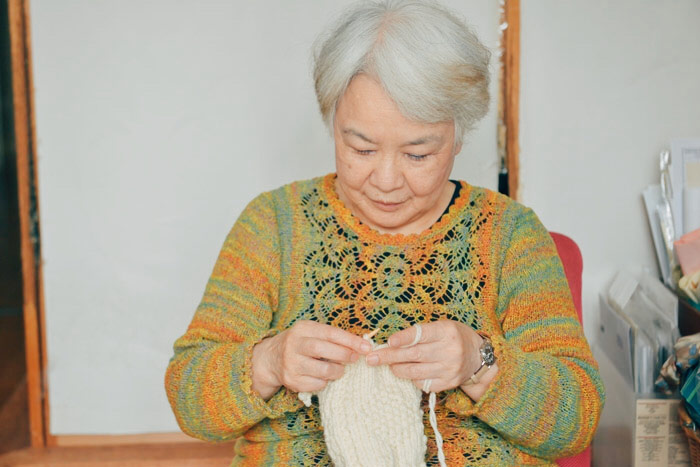 Chiyoko was born in Yamaguchi Prefecture in 1950. Chiyoko, who grew up in a small town near the sea, saw fishermen's wives walking around selling fish and knitting in their spare time. The first time I had a hand-knitted knit for myself was when I was in junior high school.

“My mother took me to have a cardigan made for me to wear over my school’s sailor uniform. In addition, since I am the eldest daughter of a farmer, I was always told to go out and help with the farm work while the sun was rising, so even though the sun was out, I didn't go home. I was very envious of being able to work in the company, and that's how I became interested in my current job." 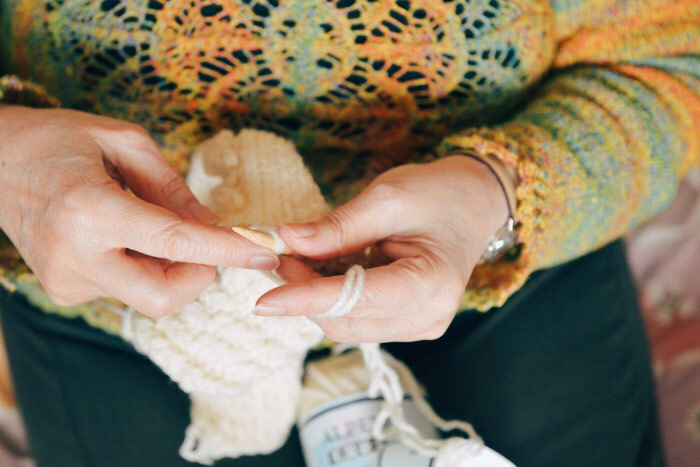 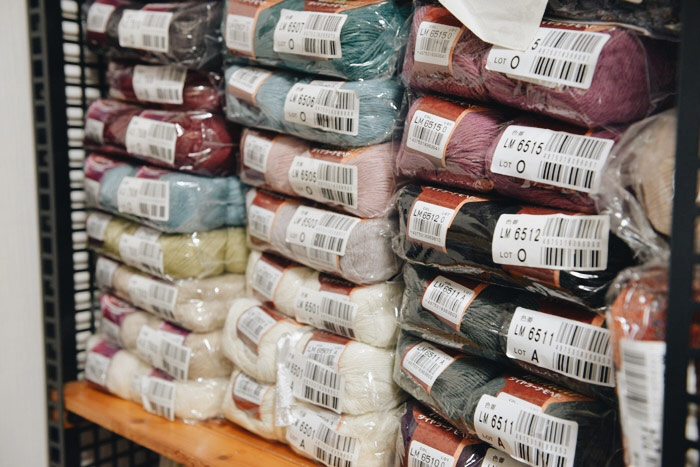 "Back then, I didn't have enough money to go to class, so I learned everything from books. I started working as a knitter when my child was already in elementary school, so I was about 40. There is. At that time, Mr. Yuzawaya was looking for a knitter. I took what I had knitted and went to the interview, and they said, 'Okay, please,' and I got the job right away."

Chiyoko was at a loss when she saw the knitting pattern that was handed to her. Chiyoko, who taught herself how to knit, still didn't know right or left. However, instead of saying, "I can't knit," I pulled out all the books I had and completed the work. Since then, I have been knitting knits, taking on any job that was requested. 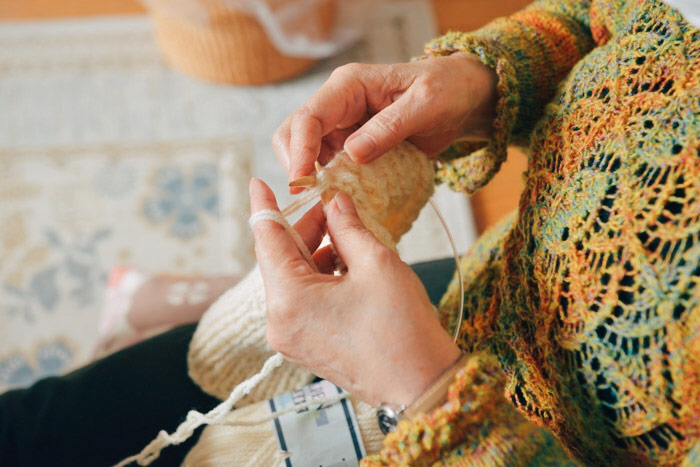 “Since 1995, I have been undertaking work for Naito Shoji (a long-established wholesaler that handles wool from all over the world), but I have never once said, 'I can't do it.' When you knit, you have to decide which colors you like and which designs you like, but when I work as a manufacturer, I get to touch new yarns every time, and I can knit patterns that I don't usually knit, which is really fun. That's why I learned how to knit while working.I think I was able to knit this pattern because I learned everything on my own."

Among the new Aran knit accessories sold this year, including the prototype, the muffler woven with white yarn was all knitted by Chiyoko.

When she picks up the finished mitten, Chiyoko says, "The other side of the mitten is also beautiful," and turns it over. There was a cute pattern like a tree. Even in places that we normally cannot see, there is a lot of detailed work.

Chiyoko now spends most of her time knitting, from the time she wakes up in the morning until she goes to sleep. Sitting on a chair causes my blood to drop, so I sit on a legless chair and knit. In this room, the knitted knitted while bathing in the light of the sun is sent to someone's hand. 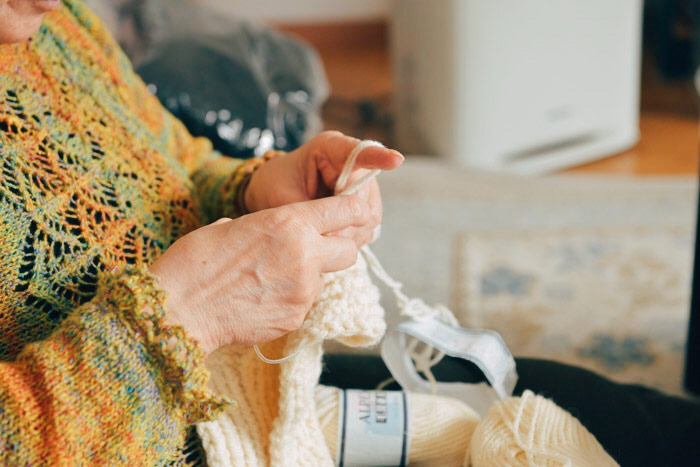 Orders for this Aran knit accessory have ended in May 2020. YUKI FUJISAWA plans to make knitwear with Chiyoko again next year. Please look forward to it.